Also of note is the pair of Ryom Tae Ok & Kim Ju Sik, from North Korea. Interestingly, Ryom and Kim trained with Canadian coach Bruno Marcotte in Montreal for two months in 2017, and are said to be big fans of two-time World Champions Duhamel & Radford.

The moment the North Koreans took to the ice for their short program, the crowd erupted in support of the pair. The now infamous PRK cheerleading squad was also in full force, with all 229 women seated in the same section of the arena chanting and swaying in unison.

The young skaters seemed to feed off the energy in the building, and delivered a captivating performance which earned them a score of 69.40. By placing among the top 16 teams, they also qualified to advance in the competition.

Next to skate were Canadians Kirsten Moore-Towers and Michael Marinaro. Competing for the first time together at the Olympics, the duo earned a score of 65.68. Shortly thereafter, Julianne Seguin and Charlie Bilodeau delivered a strong performance of their own, earning a score of 67.52. Both pairs qualified for tomorrow’s free skate.

Seven-time National Champions Megan Duhamel & Eric Radford, who were also part of the squad that earned gold in the Team Event, took to the ice for the third time in PyeongChang. The pair skated beautifully to April Meservy’s interpretation of U2’s “With or Without You” and earned a score of 76.82, placing them in 3rd after the short program.

The Winds of Winter

Not long after the figure skating wrapped-up, a wicked windstorm blew into the Gagneung area. The Venue Media Centre at the GIA, which is actually just a great big tent located outside the arena, started swaying precariously, prompting the PyeongChang Organizing Committee to evacuate the premises. My fellow photographers and I had to relocate to a designated area inside the arena in order to finish editing and uploading our images. Thankfully, in the end, no real harm was done.

Eventually I made my way back to the GMV for a quick nap, before heading to the Mountain Cluster for Wednesday evening’s medal ceremony. I must say, I didn’t quite expect to be making daily trips to the PyeongChang Olympic Plaza (POP), but the hour-long commute is actually quite relaxing. The scenery is beautiful and it’s nice to be able to daydream a little bit between events.

For this evening’s ceremony I was granted a spot in the pit directly in front of the stage. (Special thanks to the venue photo manager, Julia Vynokurova, for providing me with such a prime position!) I was very pleased to be able to photograph Kim Boutin receiving her bronze medal for yesterday’s 3rd place finish in the Ladies’ 500m short track event. What I hadn’t anticipated was how emotional the experience would be.

You see, following yesterday’s race, Kim faced unbelievable criticism from Korean fans who felt that she was somehow responsible for Choi Minjeong’s disqualification in the A Final. I first became aware of the severity of the situation last night when I posted and tagged a photo of Kim on my Instagram account, and within seconds people started posting very harsh and derogatory comments. As it happens, on-line trolls went so far as to issue death threats towards the young Olympian, despite the fact that she literally had nothing to do with the judges’ decision to penalize the Korean skater.

When Kim walked on stage for the medal ceremony she was smiling, but you could tell that she was not quite her usual self. She appeared exhausted, overwhelmed and uneasy. As she stood on the podium awaiting her medal, she began to cry. These were not tears of joy, but rather of distress. It was gut wrenching to witness. No one deserves to have their Olympic moment hijacked, in particular a woman who did nothing to merit such vile criticism.

To her credit, Kim put on a brave face when she received her medal, and smiled for me as I took her picture. Nevertheless, I felt badly that she was deprived of the joy that usually accompanies standing on the Olympic podium.

As soon as the medal presentation ended, I made my way to the mixed zone in order to capture some close-up shots and share a few words with the bronze medalist. While I can’t claim to know Kim very well, I felt it was important to let her know that she had the full support of her fellow Canadians.

Once Kim completed a few TV interviews, she made her way towards the area where I was standing and paused long enough for me to take a few pictures. I then offered her some words of encouragement and gave her a big hug. I’m not sure that my actions made much of a difference, but if nothing else hopefully Kim recognizes that we are all very proud of her accomplishments and wish her continued success during the rest of the Games.

Before leaving the POP, I decided to wander around the plaza and capture some photos of the Olympic Cauldron. Eventually, I hopped on a shuttle and made the return trip to the GMV. Upon arrival, I decided to visit Czech House nearby and enjoy a pint of Pilsner Urquell before calling it a night. The Olympics have only been going on for five days, yet I already have memories to last a lifetime. I can’t wait to see what excitement tomorrow brings! 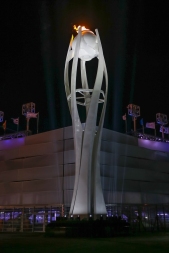 Julianne Seguin takes flight as Charlie Bilodeau throws her in the air during the Pair Skating competition. (Photo: Greg Kolz) 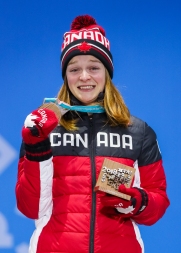 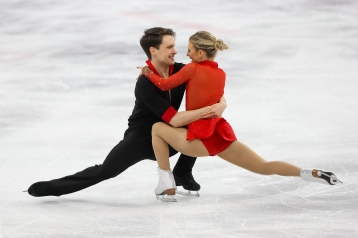 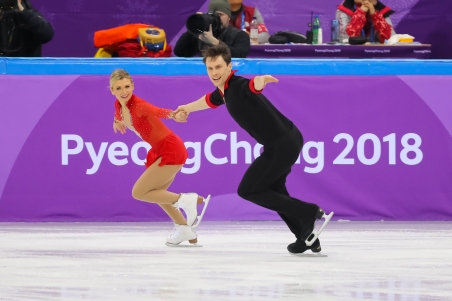 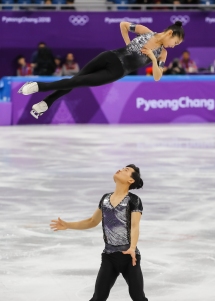