As the official photographer for Skate Canada and Speed Skating Canada, I am responsible for covering all figure skating, short track, and long track speed skating events throughout the PyeongChang 2018 Olympic Winter Games.

The competition schedule has been designed to cater primarily to the North American viewing audience.  Because PyeongChang is 14 hours ahead of the Eastern time zone, this means that many of the most popular events are held either early in the morning or late in the evening here in Korea.  On this particular date, the speed skating events began at 7:00pm local time, which meant that I had plenty of time to sort through my pictures from the Opening Ceremony before making my way from the Gangneung Media Village (GMV) to the GIA.

For the short track events, I was provided with a ‘Field of Play’ (FOP) photo position, which meant that I was at ice level.  FOP positions are very limited, but also highly coveted, because they offer unparalleled views of the action.  You are literally eye-to-eye with the skaters.  This also means that you have to be prepared to move very quickly in the event of a crash, since the cushioned padding around the rink is designed to absorb the impact and shift at least a foot or two away from the ice.  In other words, standing too close to the pads, or leaning a laptop or camera gear on top or against them is a very bad idea.

In the men’s 1,500m, Canada’s Samuel Girard and Charles Hamelin each advanced to the ‘A’ Final, while Pascal Dion advanced to the ‘B’ Final.  Unfortunately, Charles was penalized in the final, and Samuel finished just off the podium in 4th position.  Pascal finished in 12th place overall.

The Women’s 3,000m relay team (consisting of Marianne St-Gelais, Kim Boutin, Jamie Macdonald and Kasandra Bradette) qualified for the ‘A’ Final, which will take place on the evening of February 20th.

In the Women’s 500m heats, Kim Boutin and Marianne St-Gelais each advanced to the quarter finals (which will be held on February 13th), while Jamie Macdonald was penalized during her qualifying race and was therefore disqualified from advancing in the 500m event.

Over at the GOV, Canada had three athletes competing in the Women’s 3,000m final: Ivanie Blondin, Isabelle Weidemann, and Brianne Tutt.  They finished in 6th, 7th, and 20th positions, respectively.

The fact that these events were running simultaneously meant that I had to literally run between GIA and GOV four times throughout the evening.  I felt as though I was participating in my own version of the 3,000m final, minus the skates.  In the end, I was quite pleased with the photos, but I’ll let you decide if I did a decent job of capturing the action as it unfolded…

Samuel Girard reacts after learning that he’d qualified for the ‘A’ Final in the Men’s 1,500m.

Charles Hamelin and Samuel Girard make a formidable duo in the ‘A’ Final of the Men’s 1,500m.

Marianne St-Gelais cruised to victory in Heat #7 of the Women’s 500m.

Kim Boutin finished first in Heat #1 of the Women’s 500m.

Charles Hamlin led the way in the Semi-Final of the Men’s 1,500m. 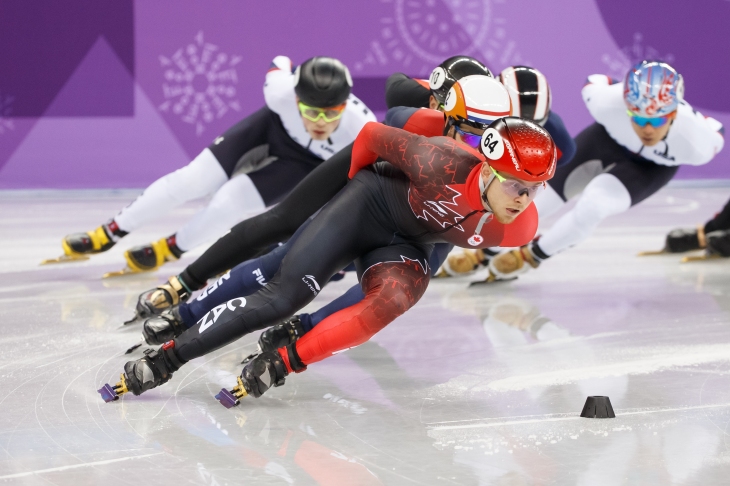 Charles Hamelin looks skyward following the judges’ decision that he’d impeded the progress of another racer, thus disqualifying him from the ‘A’ Final in the Men’s 1,500m.

Charles Hamelin consoles his teammates Samuel Girard, following the ‘A’ Final in the Men’s 1,500m. Hamelin was penalized, and Girard finished in 4th place.