In the Ice Dance competition, Canada was represented by Tessa Virtue and Scott Moir. The duo performed their Latin-themed short dance, and finished in 1st place ahead of siblings Maia and Alex Shibutani of the United States, and Ekaterina Bobrova and Dmitri Soloviev of the OAR. This earned Canada 10 points in the Team Event.

In the Ladies category, Team Canada showcased Kaetlyn Osmond. The 22 year-old earned a score of 71.38, which was good enough for 3rd place, behind Evgenia Medvedeva of OAR, and Carolina Kostner of Italy. This gave Canada an additional 8 points in the overall competition.

Meagan Duhamel and Eric Radford followed-up their solid result in the Pair Short Program two days earlier with another stellar performance in the Free Skate. Their score of 148.51 was good enough for 1st place overall, thus earning Canada 10 more points in the Team Event, and a 6-point lead over the Olympic Athletes from Russia going into the final day of the event.

As mentioned previously, Canada went into the Team Event as the odds-on favourite to win gold. It was great to see the skaters continue to live up to expectations, and perform head-and-shoulders above the rest of the competing nations. While I would have preferred to be shooting from a closer position to the ice (I was up in the rafters in ‘Section X’, which was about as far from the field of play as you could possibly be), at least I was in good company. I got to shoot alongside my friend, and figure skating photographer extraordinaire, Danielle Earl, as well as Postmedia photographer Leah Hennel, which was a lot of fun.

Once the Team Event wrapped up for the day, I then had to make my way next door to the Gangneung Oval for the Men’s 5000m Speed Skating competition.

Team Canada only had one participant in the Men’s 5,000m race, but Ted-Jan Bloemen was hardly a token entry. As the reigning world record holder in the distance, Ted-Jan was a legitimate contender for gold in PyeongChang.

Ted-Jan skated in the second-to-last pairing, finishing in a time of 6:11.616, which was literally 2 thousandths of a second faster than the man he was racing against; Sverre Lunde Pedersen of Norway, who finished in 6:11.618. This meant that Ted-Jan was provisionally in 1st place while Lunde Pedersen was in 2nd, with only two skaters remaining. The final pair consisted of the legendary Sven Kramer of the Netherlands and Patrick Beckert of Germany.

Sven Kramer solidified his reputation as arguably the greatest speed skater of all time, with a new Olympic record of 6:09.76, thus earning his 4th Olympic gold medal, and 8th Olympic medal overall.

The Venue Photo Manager at GOV was a Brazilian fellow named Romulo Macedo. I mention him specifically because he was kind enough to allow me to photograph the venue ceremony from inside the oval. To be one of only 6 photographers granted access to this prime shooting position, literally just a few feet in front of the podium, was a huge thrill.

While Ted-Jan was no doubt pleased to win an Olympic silver medal, you could tell that he had his heart set on gold. I’m sure that he will use this result to fuel his resolve in the Men’s 10,000m race scheduled for February 15th.

All in all, it was a great day for Team Canada and me personally, and hopefully a sign of things to come in the days ahead! 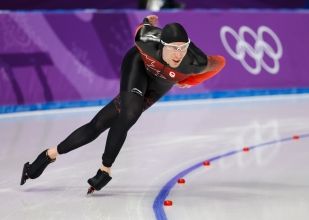 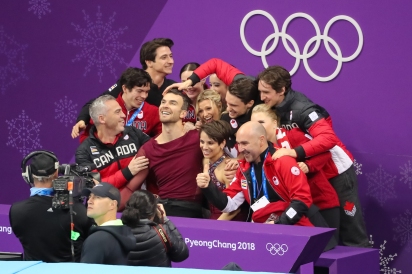 A look between Tessa Virtue & Scott Moir that say’s “We’ve got this!” as they take to the ice for the Team Event. (Photo: Greg Kolz)